David Chung performs extensively on a variety of historic and modern keyboard instruments to critical acclaim in cities across Europe, North America and Asia. Noted for his ‘finesse and sensibilité’, he has appeared in the Festival d’Ile-de-France, Hong Kong International Chamber Music Festival, Le French May Arts Festival, and Hong Kong New Vision Arts Festival, and performed in recital series of the Benton Fletcher Collection, the Cobbe Collection and the Handel House.

Chung read music and French at the Chinese University, and, upon graduation, was awarded the Jardine Matheson Scholarship for performing studies at the Royal Academy of Music, London. He received the Commonwealth Scholarship for pursuing musicological research at Churchill College, Cambridge where he completed his doctoral dissertation on 17th-century French keyboard music. Under the guidance of Gill Severs, he was awarded the Concert Recital Diploma (Premier Prix) at the London Guildhall School of Music and Drama and was a scholarship recipient at the Accademia Musicale Chigiana, Italy. He has participated in masterclasses with such eminent teachers as Christopher Hogwood, Kenneth Gilbert, Davitt Moroney and Linda Nicholson. 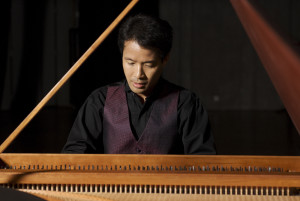