– Louis Dorus (1813–1896) :
Feuillet d’album
Dorus, a brilliant flautist on the eight keyed flute but also a great supporter of the newly invented Böhm flute, highlights the rich, even tone which Böhm was striving for when redesigning the bore of the flute and widening and doubling the finger holes.

– Charles-Valentin Alkan (1813-1888):
Le tambour bat aux champs, Op. 50 no. 2 (1859)
uit Capriccio alla soldatesca
A friend (and close neighbour) of Chopin and Liszt in Paris in the 1830s, Alkan’s strange but often wonderful music continues to move and challenge us to this day. Le tambour, published in 1859 (the year Elizabeth Walker’s flute was made by Louis Lot) is entertaining, but haunting too.

– Alphons Diepenbrock (1862-1921):
Avondschemer (1915)
We pay homage to Diepenbrock (the owner of an Erard piano of 1839 which the museum hopes to acquire) with Avondschemer (“Crepuscolo”), his only work for solo piano. This short, beautiful and thoughtful piece was written on April 16th, 1915.

– Franz Schubert (1797–1828)
Arpeggio Sonate, D. 821 (1824)
Arr. E. Walker
• Allegro moderato
• Adagio
• Allegretto
There are a number of flautists who have put their name to an arrangement of this beautiful sonata, published posthumously in 1871, for the arpeggione.

– Charles-Valentin Alkan
Chanson de la folle au bord de la mer, Op. 31 no. 8 (1844?)
Alkan is famous for his monumental virtuoso works for solo piano (the Concerto Op.39/8-10 for example, lasts about 50 minutes), but he also wrote many fine short pieces, such as the 25 Préludes Op.31 (published 1847) and 48 Esquisses Op.63 (published 1861). Alkan was one of the early admirers of Schubert’s music in France, and his Chanson may well have been influenced by distinctive dark sonorities of Schubert’s powerful Am Meer (heard later in the programme). His piece is both simple and powerful, and lingers in the memory long after is has been heard…

– Franz Schubert (1797–1828)
Introductie en Variatie, Op. 160, D.802 (1824)
naar Trockne Blumen uit Die Schöne Müllerin (D.795, 18e lied)
Franz Schubert wrote this set of variations for flute and piano in 1824, based on his Lied Trockne Blumen, the eighteenth song in his cycle Die Schöne Müllerin, to poems by Wilhelm Müller (1794 – 1827). Schubert wrote his song in 1823, and set this bleak poem (with its withered flowers, tears, the miller’s grave and profound despair) in the heavy key of E minor. However the variations make only occasional reference to the sombre song, as increasingly virtuosic high spirits and interplay between the piano and flute lift the song into something far more positive and life affirming.

Elizabeth and Richard met in 2010 at the British Flute Society convention in Manchester. Since then they have performed together live on BBC Radio 3, and recently given recitals in England, Canada, America and Switzerland. A YouTube clip of Chopin and Schubert was recorded in 2012 at Hatchlands and has attracted a lot of interest – http://youtu.be/mbzu_zlf_Z4

In October 2014 they recorded works for flute and piano by Schubert for the record label www.devinemusic.co.uk including much of the music that you will be hearing in today’s recital. They perform regularly at both Finchcocks and Hatchlands where they have enjoyed matching Elizabeth’s flute to both the Pleyel and Erard pianos and have given lecture recitals at the Royal Academy of Music in London, using the original pianos in their Piano Gallery. This summer they performed a programme of ‘Songs for Flute and Piano’ in Toronto (June 2015).

More information about Elizabeth Walker and Richard Shaw can be found at www.lizwalker.co.uk

“As perfect a demonstration of the modern wood flute’s capabilities as one could wish to hear”
Review from British Flute Society  magazine for Elizabeth’s recording of Telemann’s Fantasias. 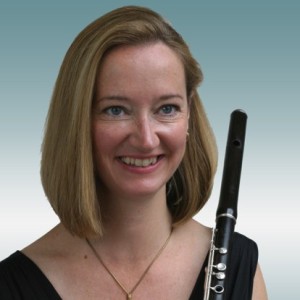 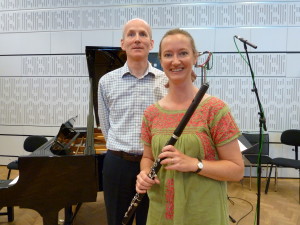 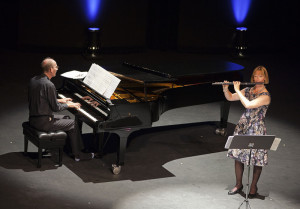