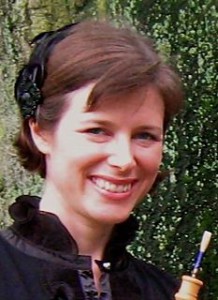 Allison M. Smith studied historical oboes with Frank de Bruine at the Koninklijk Conservatorium Den Haag (M.M., B.M.), oboe with Alex Klein and Ray Still at Northwestern University School of Music in the Chicago area (M.M.), and oboe and baroque oboe with Marc Schachman at Vassar College in New York (B.A.). She has performed under the baton of conductors such as Gustav Leonhardt and Richard Egarr, and has appeared in ensembles from The Netherlands, France, Germany, England, and the United States. A special talent is her imitation of birdcalls by whistling for which she has been featured as soloist, from chamber music and orchestral concerts to aria and opera performances. Her concert appearances, including performances on historical oboes, recorder, and birdcalls, have been broadcast on Radio 4, Radio West, Radio Capelle, and Deutschlandradio Kultur.

On Sunday 7 September 2014, Allison Smith performs with a quintet with wind instruments and fortepiano, in a recital ‘Onderweg naar Mozart’