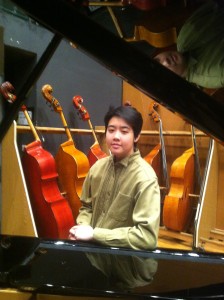 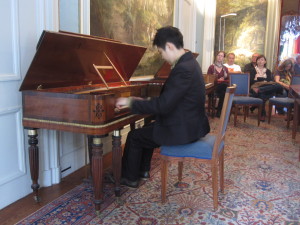 Taiwanese pianist Hsu Chia‐Yu (1989), born in a non‐musical family. Her musical talent was soon discovered in her childhood. She started to play the piano at the age of four, gave her first concert at the age of six. Between 2004 and 2007, she studied both piano and violin in The Affiliated Senior High School of National Taiwan Normal University, then enrolled at Taipei National University of the Arts (TNUA), in the class of piano with Rolf‐Peter Wille until 2008. Before studied in France, she has already been the recipient of several prizes in Taiwan, including Second prize at 22th Kawai National Piano Competition, 1st Hsing Tien Kong Music Competition for Talented Youth and 2004 Taipei City Music Competition.
In 2009, Hsu Chia‐Yu was admitted as a student at Conservatoire National Supérieur de Musique et de Danse de Paris. She studies here with Georges Pludermacher, Haruko UEDA, Claire DESERT, Michel Dalberto and Patrick Cohen until now. Hsu Chia‐Yu has already given over 40 performances in festivals and conerts. She appeared in concert in Paris, (in the «Grande Halle de la Villette », «Musée de la musique at Cité de la Musique », played on a copy of piano Erard 1802), Pamiers, Argentan, (with a invitation of Michel Onfray) in France, in The Netherlands: Amsterdam and Dordrecht, Taiwan (Taipei).

Chia-Yu Hsu participated in the fringe of the Geelvinck Pianoforte Festival 2012 and played a recital on Saturday 6 October that year.