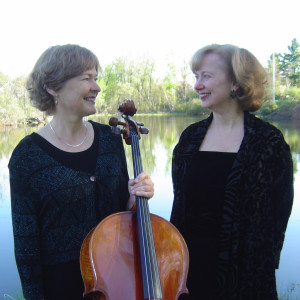 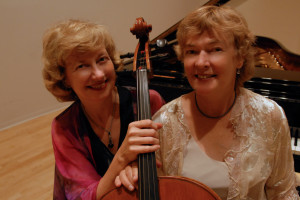 Pianist Diana Fanning and cellist Dieuwke Davydov have been acclaimed in the U.S. and abroad for their virtuosic brilliance, musical insight, and remarkable rapport as a Duo. Besides touring in New England, the Duo has undertaken extensive concert tours of Europe which have included recordings for Radio Netherlands. Davydov and Fanning were presented in a Carnegie Recital Hall debut after winning the Concert Artists Guild International Competition in New York City. Radio audiences throughout the Northeast and Canada have heard the Duo on the “Morning Pro Musica” Live Performers Series over WGBH-FM, Boston. Davydov and Fanning have also been featured in live concert performances on WNYC, New York, and on Vermont Public Radio. They recently celebrated 30 years of performing together with a series of concerts and the release of a CD of live concert performances. In spring of 2014 they will embark on their seventh concert tour of Europe.

Wonderful temperament,” “superb style,” “grace and virtuosic ease” are some of the superlatives used to describe the playing of cellist Dieuwke Davydov. A native of Holland, she graduated from the Amsterdam Conservatory, where her principal teacher was Tibor de Machula, solo cellist of the Concertgebouw Orchestra. After winning first prize in the Jeunesse Musicale International Competition in London, she was invited to the U.S. to study with the legendary cellist Leonard Rose at the Juilliard School of Music in New York. Ms. Davydov has concertized in recitals with piano and as a soloist with orchestras in Amsterdam, Berlin, London, Geneva, Brussels, Paris, and Nairobi, Kenya; and in New Haven, Boston, New York, Philadelphia and Washington. She has appeared several times as a soloist with the Vermont Symphony Orchestra and was a guest-member of the Orquestra Sinfonica Nacional in Panama. She is the co-founder and former manager of the Champlain Philharmonic Orchestra and is an Affiliate Artist at Middlebury College in Vermont.

Diana Fanning has toured as a recitalist and chamber musician throughout the eastern U.S. and in England, France, Austria, Switzerland, Holland, the Czech Republic and Germany. After a concert in Munich, a critic wrote that “Diana Fanning stunned her listeners with the rich spectrum of subtle colors and tonal nuances she revealed. Her recital seized the audience with a veritable deep magic.” She is a frequent concerto soloist with the Vermont Symphony Orchestra. Vermont Public Television featured her in a program of works by Scarlatti, Ravel and Chopin. Ms. Fanning has been a guest artist with the Takacs, the Alexander and the Jupiter String Quartets, and with ensembles from Point Counter Point Music Camp, which she owned and directed for ten years with her husband Emory Fanning. Her CD of works by Janacek, Chopin, and Debussy has received enthusiastic reviews in England and the U.S. She is an Affiliate Artist at Middlebury College, Vermont. Her principal teacher has been Ruth Geiger of New York City; she also studied with Marcelle Heuclin at the Paris Conservatory. Please visit her website at www.middlebury.edu/~fanning