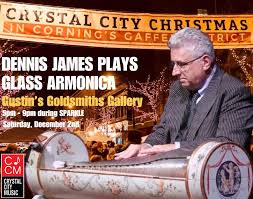 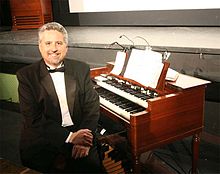 Dennis James is an American musician and historic preservationist who played “a pivotal role in the international revival of silent films presented with period-authentic live music.”[1]Beginning in 1969, he presented historically informed live accompaniments for silent films, with piano, theatre organ, chamber ensemble and full symphony orchestras, throughout the United States, Canada, Mexico and overseas. He is now primarily active as a noted multi-instrumentalist, specializing on Franklin glass armonica and the theremin, prominently performing in New York at the Metropolitan Opera, for Hollywood film scorings, and repeat performances at Lincoln Center’s Mostly Mozart Festival (debuting with Roger Norrington and the London Classical Players) plus performing at the Tanglewood Festival with the Boston Symphony Orchestra performing the intricate glass armonica part in the U.S. debut of George Benjamin’s opera “Written On Skin.”.

James has also become active in the preservation and restoration of other historic instruments such as the Cristal d’ Baschet and Ondes Martenot plus has begun performing early syncopated jazz and mid-century moderne styled period-piano repertoire within a multitude of other specialist musical activities generally considered of marginal cultural impact predominantly subject to the whims of amateurs and enthusiasts.[1]

Early musical training
James was born in Philadelphia in 1950 and began formal organ training at the age of 12.[2] At the age of 16, he replaced his teacher, Leonard ‘Melody Mac’ MacClain, in concert when the latter suffered a heart attack before the performance, and that exposure put him on an international touring circuit.[3] James attended Indiana University’s School of Music as a student of concert and church organ performance, earning his bachelor’s and master’s degrees under the tutelage of Dr. Oswald G. Ragatz.[2]

Glass armonica performance
James plays the Franklin glass armonica and has collected other vitreous music instruments including several Francis Hopkinson Smith’s 19th century Grand Harmonicons, one of the few surviving Beyer Glass-cords from 1786, and modern glass instruments such as verrophone, the cristal d’ Baschet, along with a wide variety of glass flutes and glass bells.[4] He is currently constructing an expanded version of the French Bouteillophone creating a touring continuo instrument for 18th c. ensemble repertoire. James played his glass instruments on Marco Beltrami’s film scores for The Minus Man (1999) and The Faculty (1998).[4] “I first became aware of glass instruments at about the age of 6 while visiting the Franklin Institute in Philadelphia. I can still recall being mesmerized by the appearance of the original Benjamin Franklin armonica then on display in its own showcase in the entry rotunda of the city’s famed science museum.”.[4] In the interest of historical and philological accuracy, James adheres to Franklin’s original name, “armonica” without the “h”.

From 2010 to 2015 James served as the initial appointed Lecturer in glass music studies at the Mason Gross School of the Arts at Rutgers University in New Brunswick, New Jersey, designing a glass music studies program that including graduate level student instruction in Seraphim and Armonica (the first such academic appointment in the history of the field). James performed glass armonica contributions to six Linda Ronstadt’s popular music CD album projects, including Winter Light and the Grammy Award-winning “Dedicated to the One I Love” and “Trio II” featuring Dolly Parton and EmmyLou Harris. “Linda explained she had first heard the sounds of rubbed glass some 15 years before, just where, though, escapes her to this day.[4] She kept that ethereal sound in her mind all those years and it was during the orchestra sessions and post-session mix on the track “A River for Him”, written by Emmylou Harris, that Linda had the inspiration to add the glass tones”, says James.[4] James appeared on Late Night with David Letterman with Ronstadt.[4] “It was a great surprise. A sort of unspoken message in the air to me before the broadcast was ‘Do not say anything on the air!’ After all, these things are Linda’s appearances. When David Letterman leaned over his desk and directed a question to me I simply froze – on playback of the dub I can see myself caught and unable to speak. I received a glance from Linda that said to me it was OK and so when he tried again I called back a flip one liner and on things went from there”, says James.[4]

James recorded an album of all glass music, Cristal: Glass Music Through the Ages co-produced by Ronstadt and Grammy Award-winning producer John Boylan.[14] James plays the glass armonica, the cristal and the seraphim on the CD in original historical compositions for glass by Mozart, Scarlatti, Schnaubelt, and Fauré.[14] James collaborates with the Emerson String Quartet, operatic soprano Ruth Ann Swenson, and Ronstadt.[14]

Silent Film performances
James’ interest in silent film performance with live music dates from 1969 at the Tower Theatre in Upper Darby, Pennsylvania.[4] As James recalls, “The late ‘Flicker Fingers’ himself, California touring theatre organist Gaylord Carter, was at the Wurlitzer theatre pipe organ console and on the screen Douglas Fairbanks, Sr. in The Mark of Zorro.[4] In classic ‘Chorus Line’ fashion, I turned to my Dad at the end and said ‘I can do that!'”[4]

James’ interest in silent film performance with live music dates from 1969 at the Tower Theatre in Upper Darby, Pennsylvania.[4] As James recalls, “The late ‘Flicker Fingers’ himself, California touring theatre organist Gaylord Carter, was at the Wurlitzer theatre pipe organ console and on the screen Douglas Fairbanks, Sr. in The Mark of Zorro.[4] In classic ‘Chorus Line’ fashion, I turned to my Dad at the end and said ‘I can do that!'”[4]

James began performing films in October, 1969 and soon in full scale revival performances together with symphony orchestras beginning in 1971.[5] From 1975 to 1989, James was the final appointed professional “Resident Organist for the Ohio Theatre” in Columbus, Ohio having revived a bygone era staff position vacated in 1942.[6] James had his organ concerto with orchestra debut with the Chicago Symphony at Orchestra Hall in 1984.[2] James toured in the 1980s with silent film stars Lillian Gish and Charles ‘Buddy’ Rogers, providing musical accompaniment on national tour revivals of their motion pictures.[6] The New York Times reported on December 13, 1981 that James would play at the recently restored Pascack Theater in Westwood, New Jersey, a deluxe movie house with facilities for stage productions and a specially built Wurlitzer pipe organ for accompanying silent films. James “follows the technique and style of the old-time accompanists, cueing the music exactly to the action and mood on the screen.”[7] In 1998, James began simultaneously serving as House Organist for the El Capitan Theatre in Hollywood, House Organist for the Paramount Theatre in Seattle and House Organist for the Historic Everett Theatre in Everett, Washington plus his appointments as Theatre Organist for the San Diego Symphony, silent film organist for the Stanford Theatre and the San Francisco Silent Film Festival, expanding in recent years to encompass many additional positions.