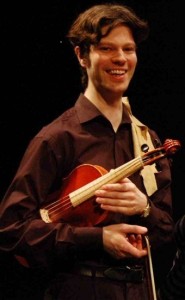 James Hewitt is active in both early and contemporary music, and becoming well known for his engaging personal style and improvisatory  prowess.

He performs throughout Europe, both solo and in ensembles includingContrasto Armonico, the Northern Consort, and the Scroll Ensemble, which specialises in programmes inspired by improvisatory practices of the baroque and was featured in the Leipzig Improvisation Festival 2011. He has participated in several recordings with Contrasto Armonico, associated with an extended project to record all of Handel’s Italian Cantatas, and has broadcast on Dutch Radio 4.
He leads workshops,  such as the dance orchestra and instrumental workshop of Yiddish Summer Weimar, and is associated as an artist for MEMO, giving concerts in schools for young children.