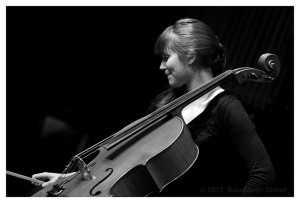 Juliette Froissart began the cello at the age of 8 with Françoise Vautrin at the Conservatoire Regional de Nancy, France, and two years with Jean-Charles Rougier at the Conservatoire de Metz, France. She also studied two others years at the Musikhochschule von Bremen, Germany with Alexander Baillie. She became a student of Michel Strauss and Jan-Ype Nota in 2009 at the Prins Claus Conservatorium in Groningen and graduated three years later. She is now studying with the same teachers at the Royal Conservatory of the Hague. She did masterclass with great cellists, such as Michel Strauss, Jean-Guihen Queyras, Maria Kliegel, Roland Pidoux, Anner Bylsma, Henri Demarquette.