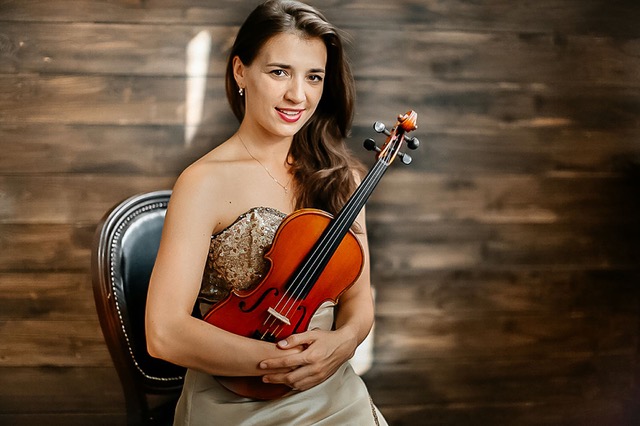 Ksenia Beltiukova (1986) was born in Minsk in a musical family. In 1992 she began violin lessons with
Tatiana Bodneva, Lilia Umnova and Natalia Lapshina at the Music College in Minsk. Ksenia performed
regularly with the Philharmonic Orchestra of Belarus and the State Chamber orchestra. Ksenia
followed master classes with Dora Schwarzberg, Lydia Mordkovitch, Gerhard Schulz, Herman
Krebbers, Georgy Pauk and Josef Rissin. Since 2005 Ksenia studied with Ilya Grubert at the
Conservatory of Amsterdam. In 2010 she completed  Cum laude of her Master Degree.
Ksenia is the prizewinner of the International Violin Competition “Jaroslav Kocian” (Czech Republic),
the International Violin Competition  Michail Elsky (Belarus) and the National Princess Christina
Competition (Netherlands). She is the laureate of the Chamber Music Competition Almere
(Netherlands, 2007), Vibrarte Competition (Paris, 2008), Grachtenfestival Conservatory Competition
(Amsterdam, 2008) and Vriendenkrans / Debut Concours (Amsterdam, 2010). At the age of 18, Ksenia
made her successful debut at the Carnegie Recital Hall in New York as prizewinner of the Princess
Christina Competition.  In 2008 she was awarded the prestigious Bernard Haitink prize at the
Concertgebouw (Amsterdam). During  Het Debut concert Tour 2010 Ksenia performed in all major
concert halls in the Netherlands together with pianist Vital Stahievitch. In 2011 Ksenia was on Tour in
Italy with the CEI Symphony Orchestra performing Tchaikovsky Violin Concerto. Ksenia also performed
in “New Masters on Tour concert series ­ organized by International Holland Music Sessions in the
Netherlands and abroad. During 2010­2011 she participated in the concerts with Royal
Concertgebouw Orchestra and Amsterdam Sinfonietta. In 2012 Ksenia was invited to teach at the
Belarusian Conservatorium in Minsk. From 2015 she also teaches at the Belarusian Music College in
Minsk. Ksenia regularly performs the concerts in Belarus and abroad.