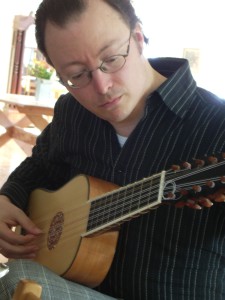 Mårten Falk is one of Sweden’s most internationally active guitarists. He has played in USA, Canada, Japan, France, Belgium, Spain, Ukraine, Chile, Peru, Argentine, Sweden and Finland and he has also performed in radio in many different countries. His three solo recordings on dB Productions label have been met with fantastic reviews around the world.

Composers from Sweden, Italy, Chile, Japan and Canada have dedicated their guitar pieces to him and he has given more than 70 world premieres.
Mårten Falk was born in Stockholm, Sweden in 1973 and started playing guitar at the age of 8. He has studied guitar in Sweden with Christer Hellqvist and Gunnar Lif. At the same time he also studied composition with Sven-David Sandström. In 1996 Mårten Falk was admitted in the class of Alberto Ponce in the Ecole Normale de Musique in Paris, where he studied until 1999.

Mårten Falk is also frequently asked to give masterclasses in Sweden and abroad.
In July-August, the Swedish Guitar and Lute Society, where Falk was president 2003-2007, organizes the festival and course “Liten Gitarrakademi”, located in the west of Sweden. Mårten Falk usually teach at this venue. This course is the oldest in the world and has had an impressing number of stars over the years: Alirio Diaz, Carlos Barbosa-Lima, Angelo Gilardino, Eugen Dumbois, Hubert Käppel, Sharon Isbin, Roberto Aussel etc. etc. For more info: http://www.sgls.nu