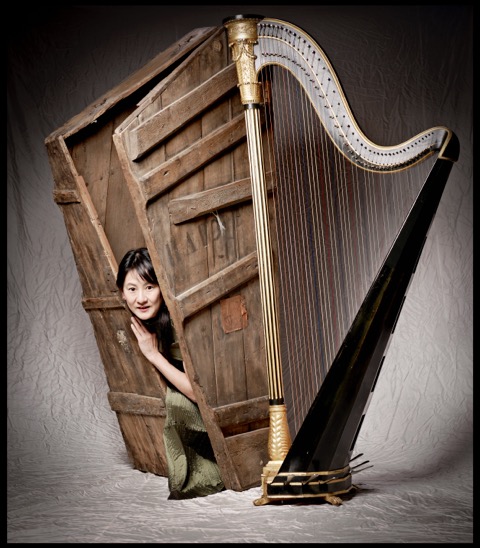 Masumi Nagasawa harp, foto: Merlijn Doomernik
Deel dit bericht:
Masumi Nagasawa is one of the few harpists to perform on the modern Grand Harp, the single-action pedal harp (18th-19th century historical harp), the Irish harp and the kugo or Japanese ancient harp. She studied modern harp with Phia Berghout at the Conservatory in Maastricht and historical harp with Mara Galassi. She gained her solo diploma cum laude as well as the award of the Prix d’Excellence. She received the Muramatsu Music Prize Grand Prix Japan in 1990, awarded only to prestigious musicians. She has since been invited to International Festivals and also to various International Harp competitions as a jury member, these including the Concours de harpe Lily Laskine in Paris. Numerous of her CDs are released by Toshiba EMI Japan, Etcetera and Channel Classics. Masumi has given recitals in major concert halls in Amsterdam, Tokyo, Budapest, Rome, Prague, Washington D.C., Copenhagen and Brussels. Her recitals are highly varied, always changing with the development and expansion of her repertoire. She has been a soloist with the Amsterdam Concertgebouw Chamber Orchestra, St. John’s College Choir Cambridge and has also appeared as a soloist together with Dame Kiri Te Kanawa and Cecilia Bartoli. International festivals where she has been invited to perform include the Kuhmo International Chamber Music Festival, the Salzburg Music Festival, the Geneva Music Festival, the Akiyoshidai International Music Festival, the Ittinger Pfingstkonzerte, and the Torino Milano Festival Internazionale della Musica. On historical harp she has performed with the Academy of Ancient Music, the Freiburger Baroque Orchestra, the Balthasar-Neuman Ensemble, the Kammerorchester Basel, the Orchestra La Scintilla and the Netherlands Bach Society. Alongside her concert appearances she both composes and arranges music for the harp; this has also been published and recorded. She currently teaches at the Conservatory in Maastricht. She is also completing her PhD at Leeds University in England under Professor Clive Brown on “ Single-action pedal harp and their implications for the performing practice of its repertoire from 1760 to 1830”.
Nieuwsbrief
Word vriend / doneer
Volg ons op: