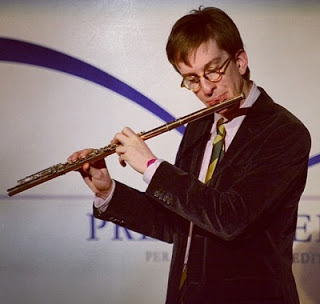 Mauro Colantonio is a historical flute and Viola da gamba player. He started his musical education with piano and flute and graduated in modern flute at the age of 18 with the highest marks. He specialized under the guidance of Bruno Grossi and Maxence Larrieu. He was introduced to the baroque flute by Marcello Gatti and he got his diploma under the guidance of Marco Brolli at Scuola Civica di Musica “C.Abbado” in Milan, with the highest marks, and specialized with Marten Root at Conservatorium van Amsterdam.

In Milan, he studied Viola da gamba with Rodney Prada and specialized with Vittorio Ghielmi and Fahmi Alqhai. Studying with Diego Fratelli, he developed a particular interest for renaissance music, polyphony and the practice of ‘contrappunto alla mente’.

Both as gamba and traverso player, he performed for several important festivals in Italy, Switzerland, Holland and France, such as MiTo, laBiennale di Venezia, le Serate Musicali di Milano, La Società del Quartetto. He collaborates with many ensembles such as Holland Baroque, La Risonanza, L’Estro di Orfeo and many others.