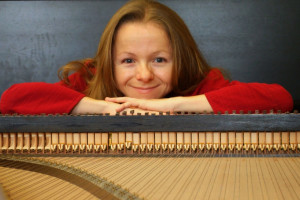 Olga Witthauer (*1981 in Aachen) holds an artist diploma in modern piano from Cologne music university and a master’s degree in fortepiano from Sibelius Academy Helsinki where she studied with Tuija Hakkila. Additionally, she took fortepiano lessons with Malcolm Bilson at Cornell university in Ithaca, and participated in masterclasses with Richard Egarr, Robert Levin, Mitzi Meyerson and Bart van Oort. She currently is pursuing doctoral studies in fortepiano and historical performance practice at Sibelius Academy.

Olga Witthauer has received grants and scholarships from the DAAD, the Finnish Cultural Foundation, Wihuri Foundation and Arts Promotion Centre Finland among others. She has performed as soloist and in various chamber music groups in Finland, Germany, Denmark, Belgium, the Netherlands and Canada. Together with Helene Joy and Elina Mattila she founded the Trio Walter in 2008, a classical trio formation with traverso, baroque cello and fortepiano.

In June 2013 she was finalist in the first international fortepiano competition “Muzio Clementi Prize” in Rome. In the Netherlands, she recently performed in a Fabulous Fringe concert with baroque cellist Guadalupe López Íñiguez at the Utrecht festival 2013.