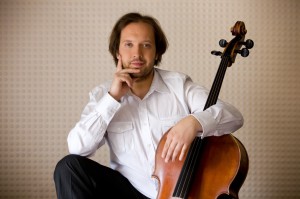 Petr Nouzovský is one of the foremost cellists of his generation.
After studies in Prague, Dresden and Madrid, he improved his artistry in master classes with Boris Pergamenschikov, David Geringas and Mstislav Rostropovich.
As a soloist he has performed all over the world – in Moscow in Rachmaninoff Hall and the Moscow International Performing ArtsCenter, in St. Petersburg in Glinka Hall, in Buenos Aires at Teatro Coliseo, and in Istanbul and Los Angeles to name just a few.
Nouzovsky’s solo debut was at the Prague Spring Festival in 2005, and he has been invited back nearly every year since. He made his debut in Amsterdam’s Concertgebouw in 2008, at Pau Casals Festival in 2010, at Santander Festival in 2011 and at Kasseler Musiktage in 2011. His busy concert schedule includes some 150 appearances each year. He is featured on 15 CD recordings.

His instrument is a Jean Baptiste Vuillaume cello from 1835.

… Petr Nouzovský is a fine cellist who plays most expressively …”Fanfare”

… A note to say how much I enjoyed the disc Mirror Reflections, beautifully produced and recorded and most of all the soloists, the blending of Cello and Harp really magical. The Arvo Part works I thought especially wonderful … George Burgess, London