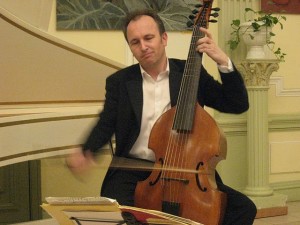 Born in Prague, Petr Wagner studied cello at the Prague Conservatoire with Josef Chuchro. This was followed by studies in musicology at the Charles‘ University in Prague and at the Royal Holloway University of London. There he was introduced to viola da gamba by Richard Boothby, later continuing with Jaap ter Linden at the Akademie für alte Musik Dresden.

After having completed his studies in Dresden, Petr was invited to study with Wieland Kuijken at the Royal Conservatoire in The Hague where he received the Uitvoerend Musicus solo diploma.

As a soloist, chamber and continuo player, Petr has appeared at numerous European festivals, as well as in other parts of the world – Israel, Japan, Mexico.  In 1998 Petr Wagner founded Ensemble Tourbillon with internationally acclaimed musicians. Its core activities focus on 17th and 18th century repertoire, with music  by Couperin, Bach, Marais, Rebel, Purcell, Finger, Fischer and Handel.

Petr regularly records and broadcasts for BBC, Polish Radio, Czech Radio and Czech TV. He has appeared on nearly 40 CDs – either as a soloist or chamber musician.  His solo CDs with Pieces de Viole by Charles Dollé (Dorian Recordings, 2003 / re-released by ArsProduktion 2012, ARS 38518) and chamber music by Gottfried Finger (Arta, 2006) have won enthusiastic reviews and reception world-wide.

In 2013, a new CD Gottfried Finger: The Complete Music for Viola da Gamba Solo with Petr and his Ensemble Tourbillon was released by ACCENT (ACC 24267).