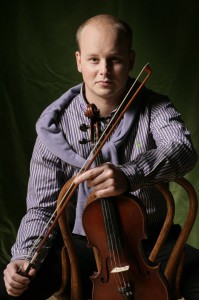 Stepan Prazak was born in Prague in 1981. He studied at the Prague Conservatory with prof. Pavel Kudelásek and after at the Pilsen Conservatory, graduating under the leadership of prof. Radka Beranova and prof. Roman Fedchuk. He studied chamber music with prof. Karel Ruis (Dvorak Quartet violist ) and his father (founder of Prazak Quartet).

He played concerts at the Festival in the Italian Bolsano, also at the Young Prague Festival and the International Festival of Serbian Kamenica. He was a judge for the competition, which was held during the festival of Antonin Dvorak in Vilnius, Lithuania.

Since 2009 he is a guest concertmaster of the Orchestra Mitteleuropeo di Udine, Italy. He regularly performs at prestigious events organized by Prague Castle and the twenty-seven European Union.

On 16 October 2014, Stepan Prazak will perform at the Geelvinck Fortepiano Festival 2014 in a recital: Czech Classical and Romantic Jewels