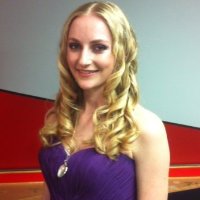 Fiona Tibbles is a New Zealand based soprano with wide experience as a soloist and vocal ensemble member. She has sung and toured with the New Zealand Secondary Students’ Choir and New Zealand Youth Choir. She currently sings with New Zealand’s professional ensemble, Voices New Zealand Chamber Choir. She has featured as soloist with the early music organisation Age of Discovery since 2012, and is a founder member of the St Patrick’s Cathedral vocal ensemble.

Fiona has studied the Art of Gesture in Melbourne with Helga M. Hill OAM, and in 2014 was engaged by the Early Arts Guild of Victoria to present period costume, gestured performances of Campion’s ‘Squire’s Masque’. As a solo singer, her particular interests are in repertoire from the baroque to early-Romantic periods, as well as in 20th and 21st century genres.